MY UNCLE DAVID, the anthropologist, encouraged me to write about the island I’m living on for two months this summer: namely, the tiny Ile de Groix, off the coast of southern Brittany. In his day, David Wason Ames did fieldwork in West Africa, studying plural marriage among the Wolof in what is now Senegal and recording the music of the Hausa in Nigeria. He was an expert at observing people in their native habitat—how they speak, eat, love, live, die, celebrate.

We non-anthropologists do the same, instinctively and amateurishly, when spending a good chunk of time in another country. In part I think it’s because we are insulated from random background chatter (I can understand French, but not if it’s being murmured rapidly some distance away), so we begin to rely on gestures, expressions, behavior as clues to meaning and intention. Also, it is just plain fun to speculate on how a foreign culture relates to our own.

Here on Groix, our “summer place” since 1983, there is a history very much like New England’s; atop some of the fancier houses near the main ports there are even widow’s walks, as on Nantucket. But instead of the men being away for months on whaling ships, they sailed off in search of tuna. Above the cross (significant!) on the church steeple in town is a silvery weathervane in the shape of the island’s signature poisson; from 1870 to 1940 Groix was the premier tuna-fishing port in France. That left it occupied by children, elderly people, and women. Guess who was in charge?

When it comes to business, the women are still largely in charge.  Whereas in the United States it is not uncommon to find anything of a financial nature being turned over to the Man of the House, here, as renters, we almost always deal with the female half of a couple. She is the “front man”: not pushy, but higher profile.

The men, on the other hand, tend to be dreamier. Often charming types with social skills and a gift for storytelling, they are good at fixing things, picking wines, and messing around on boats. They spend a lot of time in cafés drinking and smoking, greeting one another with firm handshakes. The women are brisker, more confident (though not necessarily more cosmopolitan—lacking the exposure to other countries that sailors routinely get, they are traditionally religious and parochial). Their forebears were strong females, and they grew up expecting to be the same, neither demure nor dependent. 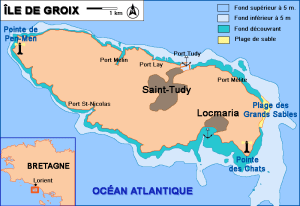 THIS IS ALSO TRUE of other Breton fishing islands. On the Ile d’Ouessant, the local museum emphasizes the primacy of women, particularly in agricultural work. Survival was a struggle. Some of the families, there and on Groix, were so poor that they roofed their houses with dung and burned it for fuel. According to the official web site (www.ouessant.fr: my translation; their emphasis), “prolonged isolation, and the almost total absence of adult males—at the beginning of the twentieth century, for every three women present on the island there was hardly a single adult male—had the result of maintaining a female society.”

Of course, we don’t always follow the scripts handed down by history. These days, younger people often build reciprocal marriages and/or working relationships; furthermore, there is the counterweight of a certain femininity à la française. In the book La Seduction: How the French Play the Game of Life, journalist Elaine Sciolino says that Gallic culture is based on the “unofficial ideology” that refined pleasures are humanity’s raison d’être. Here are some of the principles: One shouldn’t go out unless impeccably dressed, down to exquisitely lacy lingerie; meals should be treated as a sensual entrancement and negotiations as an indirect and graceful linguistic ballet; extramarital affairs are mere peccadilloes.

I think, though, that this theory applies mainly to Paris and other major cities, to chi-chi beaches and elegant château country. Brittany, especially its island cultures, is different. Pleasure has more to do with the air, sea, and sky than with pâté de foie gras, and today Groix attracts visitors with sunburned faces and well-used walking sticks, maps in hand and birdwatching guides tucked in their backpacks. Only once have I seen someone with Chanel shoes and a Prada bag getting off the boat.

Groisillonnes tend to dress for work and weather—pants, sweaters, at most a cardigan and skirt—rather than to seduce. Some older women retain carefully waved beauty-parlor hair, but most of the young and middle-aged have a short, practical cut. They are more apt to care about the appearance of their houses and gardens—fresh paint, mowed lawns, better hydrangea bushes than the neighbor’s—than that of their clothes. Their music is not the Lully and Rameau operas and ballets of the royal court but the Celtic rhythms and squeaks of accordion and bagpipe, sea shanties, folk dances in the round. The food they make is hearty rather than delicate; even the thin, crisp crepes are beefed up with blé noir (buckwheat), and after two of them you are more than replete. There is a rude health and directness to life here.

THAT’S WHY, when my husband and I come back to our rented house on Groix after visiting the mainland—occasional forays into the rich, complex food and drink and social structure of the wine country, Bordeaux or Burgundy—it is always a relief. People speak often of sun and rain (formerly the decisive factor in fishing and farming, weather now crucially affects the tourist trade). They live with cows and goats, horses and fish. Their characters are as ageless and craggy as the cliffs we walk on every evening after supper.

Perhaps those decades of women running the show have paid off in a local culture that is strikingly egalitarian and honest. My career as an amateur anthropologist may, after all, unearth more sameness than difference. In Paris, I often see myself as too big-boned, casual, underdressed, unfinished, American. Here, though, I feel just right.