HERE IS MY GRANDFATHER reading C.S. Lewis or Dickens or the Sears catalog: half-lying on the living-room couch, one foot on the floor. Beside him is an old cobbler’s bench he has turned into a pipe stand, though he no longer smokes—a respectful son’s homage to the family firm, Kaufmann Brothers & Bondy, which made high-end briars and meerschaums. He wears a khaki shirt and gray cotton pants, and he is mostly bald. It seems to me, a child, that he has always been bald.

Here is my grandfather’s bed, a four-poster high off the floor. He rigged a line from it to the bird-feeder he’d built outside the window so he could refill the tray with sunflower seeds without getting up. There, I imagine, he lay in the early morning silence, observing the pecking and flapping of wings.

He died in this bed, too.

And now, after more than two decades in storage, it presides magisterially over the extra bedroom in our apartment. It’s a presence almost as powerful as the man himself.

THE BED IS A QUASI-ANTIQUE. It was fashioned 80 or 90 years ago under the aegis of a devout, enterprising fellow named Wallace Nutting (1861-1941). Today he is best known for his hand-colored photographs, but he was also an expert on early American furniture and in 1917 started a reproduction business based on “the best forms, put together in the finest manner.” These pieces were so lovingly handcrafted, using traditional techniques, that some unscrupulous dealers passed them off as genuine, so Nutting began branding his name into his furniture.

My grandfather’s bed is signed in this fashion, on the inside of the headboard. It was made without nails; the pieces fit together precisely and are screwed into place with a wooden key. Its lines are simple, the wood lustrous. You can imagine it belonging to an 18th-century couple like the Adamses, John and Abigail, ghostly in white nightshirts, blowing out their candles and settling into sleep. 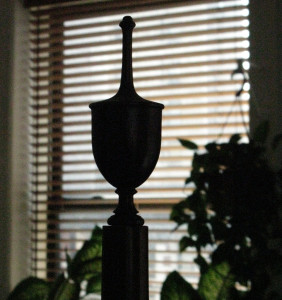 Nutting and M.J., as my grandfather was known (his actual name, much hated, was Mortimer James), belonged to the same tribe of bourgeois eccentrics: Both valued quality, and things that last. Both took photographs and had a passion for hands-on learning. M.J., in fact, built furniture himself; the workshop, sweet with sawdust, was his domain. There he labored, whistling “Margie”; surviving pieces include scaled-down chests and cabinets, two bureaus based on Pennsylvania Dutch designs, and a lectern suitable for delivering sermons.

That would have appealed to Nutting, who began as a Congregationalist minister but quit because of poor health and became an artisan and historian. My grandfather, similarly, struck out in a new direction in mid-life, switching from city to country, manufacture to farming. M.J. loved all things rural and natural; he would have liked to go to forestry school at Yale, but he was expected to stay in New York and make pipes. First he escaped to houses on Long Island; then, when his father died, to a permanent home in the New Jersey countryside.

He grew crops, kept horses, raised chickens and pigs and Black Angus cattle. Hay was stacked in the big red barn; morning glories brightened the gray stone of the cool, mysterious spring house; lettuce, tomatoes, and corn flourished in the vegetable garden; and there were plots of pansies and sweet william, my grandmother’s favorites. Life on the farm was calm and predictable. M.J. crafted his country existence as meticulously as he did his furniture.

He also went in, at various times, for bee-keeping, sailing, architecture; he was an early television owner. He kept up. In his eighties he taught himself to cook. He always reminded me of Prince Andrei’s father in War and Peace—not a dabbler, exactly, but one of those clever, scientifically inclined Enlightenment types who possessed infinite energy and curiosity.

Famously unsentimental, he nonetheless kept anise cookies and peanut brittle in the drawer of a sideboard for us grandchildren, fed leftover steak to the stray dogs who wandered in and stayed forever, wrote me every single day—an almost illegible scrawl—and sent embarrassingly elaborate care packages when I was at camp or college.

I ROMANTICIZED M.J., and it is obvious why: My father’s affair with a family friend and his sudden departure turned everything, from the time I was 12, into a morality play. My grandfather was the defender of my mother and of me and my brother, the white knight of the story, the foe of infidelity.

This is ironic, as my grandparents were hardly John and Abigail Adams. My grandmother dwelt mostly in New York while he stayed on the farm, and in her memoirs she wrote frankly about their incompatibilities. They bickered (in retrospect, I think this was a form of love). They had sexual problems: The four-poster bed was not shared; they had adjoining rooms, with a square window cut into the wall so they could talk back and forth. And he had affairs, more or less openly. Not only was he a philanderer, he was a control freak (on his shelves he had cans six deep, like a grocery store), often cantankerous and bossy, and not particularly liberal in his attitudes (though he did favor economic independence for women; in this he was ahead of his time). He had eyes like steel that could also twinkle and flirt.

What comforted me as a kid, though, was that he was regular, even ritualistic in his habits; systematic and rational in his choices; a sober man (the only liquor in the house may have been blackberry cordial) but not a depressed one, I think. Well, now I’m not sure about that. Maybe all that order was his bulwark against despair.

A FOUR-POSTER BED, even without the canopy, is reassuring because it delimits the space you sleep in—the corners create a force field, or so it seems. Have you noticed how dogs, young ones especially, seek out walls and tables and bushes that simulate caves or burrows? Ours liked the underside of the piano. I myself always wanted one of those beds built into the wall, with curtains; the four-poster is the next best thing. It feels as if you can’t fall off.

Of all my relatives, I probably resemble M.J. most, infidelities apart—in my fondness for animals, my relentless letter-writing, my regulated clockwork life. But I also have his finicky stomach, his anxiety, his fear of the unknown, his attempt to fence himself in as safely as he did his cattle or horses. From him I got the idea that I could organize and barricade myself into security.

I can’t, of course, any more than he could. But because M.J.’s particular neuroses were coupled with enormous family authority, I inherited not only his terrors but his mostly successful efforts to rationalize the ways he suppressed them. I still believe, on some level, that it is not just inconvenient but dangerous and even immoral to be late or fail to balance your checkbook or to run out of stamps or milk or toilet paper. I am compulsively judgmental and inappropriately rigid. These hard lines are an attempt to hold back the fear, the shapeless and possibly limitless panic that strikes when things don’t go as planned. Which, life being what it is, is much of the time.

M.J. DIED in 1967. For a long while my mother kept the bed in storage. But when my first marriage ended in 1980 and I moved into my own apartment, she gave it to me. I was 35 and, having married early, I’d never lived alone before. For five years I was elated and transformed in that bed, and I was also, at times, wildly sad and unhinged and suicidal. It stood by me, stalwart, as did my mother, M.J.’s favorite child.  Sleeping in it reminded me oddly of my grandfather’s sedate version of swimming: floating in the pond on a rubber inner tube, hat securely in place.

The four-poster became a boat in which, scared or not, I sailed into a happier future. It was there the night I met my husband-to-be, and when I moved in with him, back it went into storage. The bed had anchored me when I needed it most. I felt I owed it to my grandfather and my mother—now dead, too—to keep it safe. And finally it has come home. It is good to have it in the house. As if M.J. himself is haunting me, a staunch and sometimes irascible ghost.